What to Know For Your First Trip to London

This week I’m in an old hometown of mine, London England and I’m going to share with you some top tips for your first trip to London!

London is one of the easiest places for Americans to travel to; it is the mother country, after all!  This city feels like a more formal and ancient version of New York City and has everything you could want. London was my first taste of ex-pat life, where I worked as a temporary secretary in the city of London. I love the city and everything it has to offer.

The first thing to pay attention to when you’re headed to London is which airport you are coming into. Did you know there are six airports in London? You want to make a note which one you are flying in and out of.

Where to stay in London 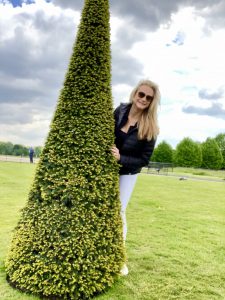 London is EXPENSIVE; there’s no doubt about that!  It’s easy to be overwhelmed and a little shocked when looking for accommodations in the city. Some of the most common questions I get are, “Where should I stay?”, “Is there anywhere affordable in London?”, “What about cheap Airbnbs?”  Honestly, cheap doesn’t exist, and if you think it’s cheap, it’s probably scary or so far out that you wouldn’t want to stay there. Not only is accommodation expensive, transportation is also expensive. So what to do? I suggest staying in a hotel inside The Circle Line (one of the Tube lines) for a couple reasons.  1. Time if of the essence, and you don’t want to waste precious hours riding the tube into the city. (TIP: Make sure your hotel is within 3-4 blocks of a tube station) 2. Transportation is also expensive and the further out you stay, the more expensive it will be to get into the city. If you’re visiting London for the first time, you will want to cough up the dough and stay as central as possible.

Here are a couple great Hotel options when booking your trip to London:

A lot of people who are traveling to the UK are also traveling to the continental Europe, but it’s important to note: In the UK, they use a different currency! In the UK they use the British Pound. It is different than the euro that you’re going to using in France, Italy, Spain etc.  A great tip: Don’t bother exchanging money from your home currency into the British Pound while you’re at home. Just wait till you get to the UK and withdraw at any of the ATMs. The exchange rate is typically better. Make sure to notify your bank that you will be traveling so you can take money out.

How to Get Around 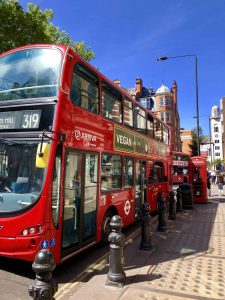 The best way to get around is by the subway or the tube – it is the most efficient and least expensive way to get around the entire city. The tubes were used as bomb shelters during WWII! The subway system is easy to use and efficient, but there are some down sides. There are constant delays and certain lines not working due to maintenance issues.  On my last trip to London, I found this great Tube App that not only shows me the best route and travel time, it shows me which lines have delays. This app was invaluable on my trip, as it saved me time as well as stress when finding my way around the city.

Tip: I suggest getting the Oyster Card. It’s a $5 deposit and then it’s only seven British pounds a day for as many rides as you want to take. When you’re done, you turn in your Oyster Card, get your five pounds back for the card and any money left on your card.

What should you wear in London?

It is 10 latitude degrees further north than New York City and it has 106 days a year average rainfall. That means bring warm clothes no matter what time of the year you’re here. Currently, it’s mid-May and packed with me a lightweight jacket, scarves, long pants and close toed shoes. The best shoes to wear in London are walking shoes. Whether you’re taking the tube, a taxi or just wandering around, you’re going to want to be in easygoing, comfortable shoes. As far as style, London is a lot like New York City, so anything goes! If you want to dress up and go to the Savoy for high tea, go for it! OR if you want to be low-key casual in your yoga pants, that works as well.

I wanted to give you a few tips about the language differences between British English and American English. First of all, when you’re in a restaurant and you need a napkin, in London you need to ask for a serviette. (I tend to make a mess when I’m eating so I need lots and lots of serviettes!) Secondly, the boot is actually the trunk of the car. Additionally, when you are asking for the restroom or the ladies room you can actually ask for the loo. When you’re staying at your hotel and they tell you you’re staying on the first floor, that does not mean you are on the ground level. It actually means that you are one level up. In England G is the ground floor, then the first floor then the second floor. Finally, the difference between chips and crisps. Here in the UK chips are french fries and crisps are potato chips.

Great Britain is not historically known for its food, but I do suggest that you give all the traditional British fare a try. Things to try:

Other things to Note

Remember that they drive on the other side of the road! If you’re renting a car, you’re going to be sitting on the right-hand side and if you rent a stick shift you’re gonna be shifting with your left hand. When you’re on the road about to turn, you have to look right, left, right! And lastly, note that the adapters for the UK are different than European adapters.

If you enjoyed these tips and you’re headed to Spain, make sure to check out my video: Everything that you need to know before you travel to Spain. See you on the next adventure!